I’m in the type of business where I often do telephone consultations with clients, doing intutive psychic tarot readings.  Usually these sessions go remarkably well and everyone comes away with a warm and fuzzy feeling and hopefully a few answers, if not a solution, to their issues.  Usually this is the way it goes.

Then one day I had a telephone consultation with “Lilly”. I knew which direction this was going to go the moment that I answered the phone, because she started talking and she didn’t stop.  Lilly spent the better part of a half hour trying to convince me that she was completely, totally, so over her ex-boyfriend, “John”, who was stolen from her by Evil Gloria– a woman whom Lilly claimed used black magic to wrench John from her.  Damn Gloria.

Here is where I tried to interrupt Lilly so that I could begin the reading.  I was abruptly cut off by Lilly’s voice saying, with only slightly veiled disdain:  “I’m paying you to listen to me.”

“Well, no”, I replied, “You’re paying me to read for you, and without some quiet, I can’t do this.” I thought this was a remarkably diplomatic way of telling Lilly to shut up.

Anyway, it didn’t matter.  Lilly started off on another ten minute tangent of how Evil Gloria stole John with her tremendous powerful utterly awful black magic.  About this time, she also started listing off all the psychics that she’s went to and how they’ve all told her that she would be happily reunited with John and Evil Gloria would meet a guy named Karma.  Lilly went on to talk about all the money that she’s spent on magic spells that she paid other people to do for her regarding this situation.  Her speech was interspersed for some reason with lot’s of “I would never try to convert you…” and “I don’t mean to be rude– but…” .  Lilly also kept referring to John as her ‘twin soul’, but from the look of the tarot cards that I kept laying, I’d say that John was getting comfortable with Evil Gloria, and maybe he was seriously considering a restraining order against Chatterbox Lilly– and I thought to myself, if he wasn’t, he should be.

Time was passing, the clock was ticking, and this conversation was going no where fast.
I tried interrupting Lilly once more, just barging in and beginning the reading by identifying the cards I laid and touching base with them before jumping through the intuitive hoop.  I no more than said one sentence when Lilly’s by now very irritating voice cut in saying, “I don’t want to hear the book meanings of the cards, I can look that up myself.”  Well, that’s true, but this is the base that I begin with before I let it rip and say what I see.  That’s the way it works; that’s how I center myself.  It’s always worked that way, and as I’m touching base with the cards in this manner, it is providing a connection for me to expand my sight.
By now, I’m fed up.  I’d rather refund Lilly for the reading and hang up on her.
I begin talking over her, telling her what I see– John is happy, John and Evil Gloria are established in a relationship– it doesn’t matter how she got him, the fact is that they are together now.  But Lilly is just not ready to let it go, and the energy from this entire situation is so toxic that I suggested she back away and have no contact with either of these people.  I also advised her to smudge her living space of negative energy and to take a cleansing bath.
There was a very small and surprised, “Oh” from Lilly.  A period of about three seconds of blessed silence was suddenly broken by a new barrage from her.  Lilly began to indignantly point out that all these pyschics she’s been going to have all told her that she will get back with John.  I cut her off saying, “I don’t care about the psychics that you’ve seen.  There’s no way for me to know if they are legitimate, or if they are just telling you what you want to hear.”
Once more I told her what the cards were telling me, emphasizing the fact that no, she is not over losing John, far from over it, that there were issues she was going to have to deal with, negative energy she was going to have to clear, and ways to move on that were going to have to be found…and that was the end of the consultation.
It literally took me the rest of the day to rid myself of Lilly’s intense overbearing disturbing energy.
As for Evil Gloria…I don’t believe that Evil Gloria stole John with witchcraft.  I have a feeling that Evil Gloria doesn’t talk much. 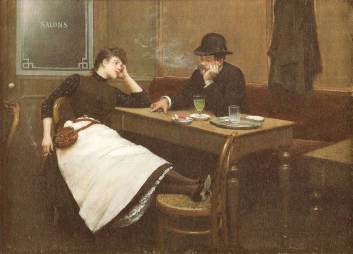