Everyone wants to cast spells.  That’s the first thing people think about, and the most popular aspect of witchcraft.  I think it might have something to do with the awesome feeling of regaining your personal power, of being in control of your life, of being responsible for your destiny and it’s outcome.  But it also has to do with mystery and drama, the visuals, and our childhood idea of “magick”.

That’s what everyone seems to concentrate on at the beginning– learning to cast spells and do magick.  For most of us the idea is new and daring and exciting, made more so by society and the mainstream view of religion and witchcraft. It’s “taboo” in so many social circles, conservative communities, and even some countries around the world. Witch hunts still exist in Africa, and your life is literally in danger if you’re labeled “Witch”. Likewise for certain areas of the Mid-East.  You can be put to death.  This idea seems outrageous, doesn’t it, in our modern world.  But we’re not always as modern as we’d like to think we are, and people still tend to be frightened and irrational when it comes to things they don’t understand, or things they were taught to view as evil.

I remember the early years, pouring over books of correspondences, aligning moon phases with intentions, jotting down ingredients, planning the moment of the casting down to the astrological hour– spending days planning and aligning and gathering.  It’s all part of the process you know, it all plays into raising energy.  And then, that magickal moment, when the circle was cast, and I was “between-the-worlds”, sitting there with the  spell candle and ingredients, the athame and crystals and stones and figurines of the god and goddess; and yes, even the black cast iron cauldron (so clique, but so necessary).

Did the spells work?  Actually, 95% of the time, they did.  Don’t count the foolish one’s of youth, or the spells whipped up in the white heat of anger.  They don’t work, the energy being too fractured and scattered (maybe Spirit is looking out for us this way, maybe this is like the safety on a gun, so that we don’t unintentionally do harm in a rash moment).  Casting spells is a lot of work, raising energy to move energy in the universe takes a lot out of you.  The power is there, no mistaking that, but it takes considerable effort on the part of the witch to work with it.

You reach a point, after the first few years, after you’ve immersed yourself in that first frenzied layer of activity, when you start to look at witchcraft and see more detail emerge.  You see below the layers of magick spells and spell casting, and all the hoopla surrounding it.  You start to look at the fabric of witchcraft- and you start to weave this into your daily life, creating your own mosaic, slipping quietly into your niche in the universe.

Okay, you’ve got spell casting down pat, you’ve experienced The Power, you know the magick is real, you are “Witch” through and through.  Now what?

For me the second stage of my journey actually began with a spell.  The spell was done to touch the universe, my Spirit Guide, and other higher energies floating through the astral, and ask them:  “What am I suppose to be doing? Why have I been drawn to this path?  What is my Gift?  How am I suppose to use it?”

The answer emerged in the flames of a purple candle. 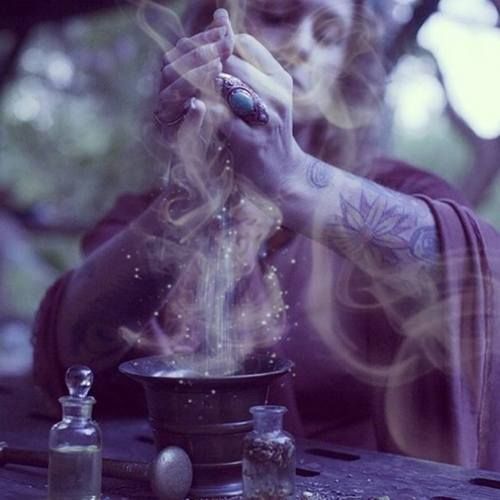 The second aspect of my journey was a new learning process, which included learning about, handling, experimenting with, and using various forms of divination– the pendulum, runes stones, I-Ching coins, crystal balls, Ouija boards, divining rods…and ultimately coming upon the one tool that would finally speak to me:  the tarot.

Round three for me– immersing myself in the study of tarot cards.

It started, actually, with a trip to our local bookstore, walking past a shelf full of decks of bright colored and beautiful cards (tarot cards).  One deck popped out at me, and that little voice in my head whispered “Buy them.”  It sounds easy and simple, but it wasn’t.  Learning anything new requires a lot of work and realistic expectations.  No one is going to pick up anything overnight, especially something that works through your own personal energy and special Gift– at the beginning you have no idea what this gift is or how the hell it works.  You have to start by learning to listen to your own inner voice (your sub-conscious, your intuition) and allowing the cards to trigger images, memories– clairvoyant, clairaudient, and clairsentient experiences.  It’s all very confusing.  You’re hesitant to trust yourself, or the cards, in the beginning, and a lot of people, when they reach this stage, give up.  Fortunately, I wasn’t one of those people.

The biggest obstacle I had to overcome:  Being afraid of being wrong.

And what if you’re wrong?  Divination is not an exact science; and no reader is going to be 100% accurate 100% of the time.  But I can honestly tell you that I have more regrets, lots and lots of big in-your-face regrets, about what I DID NOT say, rather than anything I did say.

And just when you get ready to level off at this plateau, thinking you’ve learned all you were meant to learn, and you’re doing everything you were meant to do, something unexpected happens.  Curiosity comes to call in the guise of crystals and stones, an unusual friend, a new book, a new blog, a study group, or whispered questions sent to you by the universe.  Just when you think you’ve arrived at your Spiritual Destination, it dawns on you in a magick flash of twinkling lights …that the Journey has not ended.