Catnip is commonly used in sleeping potions. The easiest and most pleasant way I can think of to use catnip for this purpose is to make a delicious pot of tea. Catnip is one of the herbs that I grow in my own gardens, so all I have to do when I want to brew a pot of catnip tea is to step outside and snatch a handful of the fresh herb. I usually use both the flowers and the leaves. How much you use is going to depend upon how strong you like your tea and the size of your pot. You can sweeten it with honey or sugar. Since catnip is a member of the mint family, I’m guessing that if you like mint in your tea, you’ll like catnip, though to me it is more pungent.

Catnip has an absolutely intoxicating effect on cats, and it was actually hard getting the catnip started in my garden because my cats wouldn’t leave it alone. I’d plant a nice lush bunch of catnip and the next morning I’d go out to find nothing but bare stems and a garden full of chewed leaves. I can’t tell you how many times we’ve looked out the kitchen windows to watch one of our cats, or a stray cat, rolling around our garden in drunken bliss.

I harvest our catnip not only for use as a tea, but as a treat for my cats and for magickal uses. To make a magickal talisman for your cat, one that he will absolutely love, you can sew two small pieces of flannel together, and just before you sew it shut add a nice bunch of fresh catnip leaves. Consecrate this talisman for your kitty to pass on the magick of good health mojo and protection.

Catnip is sacred to all pagan gods/goddesses who manifest as a cat or feline creature, including: Sekhmet, Bast, Mau, Tefnut, Mafdet, and Freya.

It’s believed that a gift of catnip from you to your cat will create a magickal and psychic bond between the two of you. Since I’ve experienced this myself, I have to say that it truly works in beautiful ways. If you make a catnip talisman for your kitty, keep this in mind. Remember that concentrating on your intentions when crafting magickal items imbues that piece with the magick. Catnip is also used in love spells, often as an ingredient in mojo bags or candle magick. Just as the cat finds this herb intoxicating and irresistible, so will the one you target in love magick, using catnip to draw them to you. Hang a bunch of dried catnip over the threshold of your home to draw good spirits and good luck, as well as to draw the blessings of cat goddesses. Catnip is also used in beauty spells, either as a tincture you can use to bathe your face, or with candle magic. It’s believed that this herb will mesmerize those targeted in such spells to see you as youthful and beautiful. This type of enchantment is considered a glamour.

Valerian is also used in sleeping potions and dream pillows, just as catnip is used. It’s said that the scent of valerian is irresistible to cats and if they find it in your garden, they will dig it up. What’s not often said is that valerian stinks. It has an extremely strong aroma that I personally don’t find especially pleasant, and although you can use this herb in relaxation and sleepy-time teas, I don’t know how on earth you could mask the taste. Commercial teas, prepared with valerian, seem to do a pretty good job of this; and I have used them many times, usually in the evenings, to unwind and relax.

It is the root of valerian that is used in a powdered form and added to protective mojo bags or dream pillows– though I don’t think I could fall asleep with the scent of this herb right under my nose. The calming effect of valerian is not limited to sleepy-time teas but also includes the energies surrounding a space. If there has been quarreling in your home, hanging this herb around your house is said to calm the atmosphere, to settle things down. Valerian is one of the herbs that can be used as a substitute for Graveyard Dirt.

In the Middle Ages rue was used as a talisman against witches and their familiars (usually cats). Perhaps the association was made in the minds of people because cats are drawn to rue much the way they are drawn to catnip, and because they are drawn to it, they dig it up and wreak havoc with the plant. I would imagine it’s the pungent aroma of rue that has something to do with this behavior, just like catnip and valerian. Because cats did this, perhaps people got the mistaken impression that cats hated rue, so they thought they could keep them at bay with the herb. Supposedly rue is used to keep cats out of your garden, away from the birdfeeders, or wherever else you don’t want them, though I suspect the opposite effect. Rue is an evergreen pernnial shrub.

Rue leaves are placed on the forehead to relieve headaches, or worn to facilitate healing. Rue is used in mojo bags poppets, and candle magick for healing, for matters of love, and to improve mental abilities. Rue is used to break hexes and curses by using it in a cleansing bath; hanging it around your home; placing it in sachets, poppets, or mojo bags; and using it in floor washes. It’s worn to protect one against poison, monsters, and the evil eye. A sprig of fresh rue is often used to dip into salt water and asperge a space.

Cats are considered to be the animal that is the ally of gamblers and games of chance, they are believed to bring good luck and success in these endeavors. Following is a cat spell that may do just that:

Candles in the shape of cats are often burned for good luck, especially luck that has to do with games of chance. This magick is especially geared towards gamblers.

1. Inscribe a cat candle with your name, lucky numbers, numbers needed for a successful outcome, or a specific amount of money.

2. Dress it with Black Cat Oil, or another gambler’s lucky oil.

Burning Lucky Cat Candles makes your wishes come true. Color coordinate the candles to suit the nature of the wish: use green for money, health, and healing; red for love, romance, and marriage; and black to resolve problems, or to break hexes and curses.

1. Carve and dress the candle, maybe using herbs and an oil that correspond with your intentions.

2. Write your wishes on a piece of paper, being very careful to be explicit in exactly what you want.

3. Ignite the corner of this paper, and use this flame to light the candle.

4. Murmur wishes, incantations, and intentions until the paper has burned to ash.

There is an old Norse tradition of paying tribute to the goddess Freya by feeding milk to cats.

1. Consecrate a crystal bowl to the goddess Freya; fill it with whole milk or sweet cream, and sit it out on your front steps or back porch for stray cats.

2. Magickal intentions are important. Consecrating and preparing the bowl and setting it out for the cats is a ritual. As you perform this ritual, consciously invoke the goddess Freya and speak your petitions to her.

3. Watch the cats, pay attention to stray cats. Pay attention to cats who may appear as an image, statuary, art, or through some other medium. This may be Freya’s way of giving you an answer to your wishes or request. 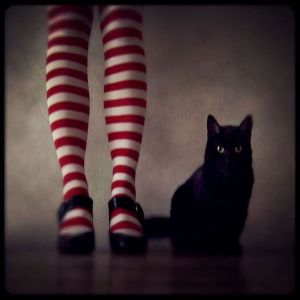