Note:
This is the beginning of an in-depth tarot study that will begin a series.  When all is said and done, this will be a book-length manuscript, but I am just not ready to publish another tarot book, so I’ve decided to post the lessons here, piece by piece, until I gather them together at a later date and offer them in bulk packages.  Feel free to print these lessons off and save them, maybe collect them in a binder.  The lessons in this Tarot Study will be posted on Tuesdays, hopefully every Tuesday for a while, but never-the-less, always on Tuesday.

This is a work-in-progress.  There will be new material added continually, which may also include editorial modifications to posts already published.

The tags used for the first series will be: tarot study guide, major arcana study

The following study guide for both the major and minor arcana will include 1) short one-word descriptions of the cards based on traditional meanings; 2) in-depth interpretations of each card based on my personal intuitive interpretation, which might be laced with traditionalism and then again, it might not; 3) necessary introspective questions meant to guide you into interpreting each card personally and connecting it in your own mind by first impressions, personal connections, and details; as well as defining each card and how it relates to the most frequent areas of life touched on in actual tarot readings– relationships, financial circumstances, and health issues.

Do not be alarmed, dismayed, or discouraged if you run across a card, or cards, that you just cannot make a connection with. Think of learning the tarot like developing a relationship. Some people hit it off together right away and feel like old friends; you have to warm up to other people slowly, over time; and then there’s those complicated mysterious individuals that it might take a long time to figure out. That’s what it’s like becoming acquainted with tarot cards. I struggled for years with The Wheel of Fortune and Judgment, mystified by them, puzzled by them, frustrated by them; and for a while, I even nurtured an intense dislike of them. But just like those irritating complicated people you feel you could never be friends with– you learn something from them.

There are so many decks out there with gorgeous artwork and a wide variety of inspiring and uniquely creative themes. I know– I collect them! Even so, it’s just easier when learning something new to stay with the basics. Once you get a handle on this and you have not only the traditional meanings and innuendos firmly in your mind, but you also have first impressions and corresponding information digested, and most importantly, once you’ve developed your own unique connection with the cards, then you can expand and experiment with different types of decks. It’s fun! Having said that, I’ve discovered that not all tarot decks lend themselves well for every aspect of tarot reading. I have certain decks that work well for me when doing readings for clients; other decks which I use only for myself; and decks that work best for meditations and other esoteric work.

Get a notebook ready. You’ll find plenty of questions throughout this study guide.  If you choose to print these lessons off, believe me, necessity and the itch to do so will compel you to start a tarot journal before it’s all said and done. Really. There’s going to be so much you want to write down, record, and save, so much more than just technical information about tarot cards. You’re going to wonder at the sudden rush of information, insight, and inspiration, and you’re going to wonder where all these gleaming revelations and inspiring messages are coming from…Believe it or not, they will be coming through You!

These are the Big Guns. The universe embellishes the major arcana with all the unique earth-shattering life-changing moments that hit us through this mortal journey. The major arcana is Spirit’s sucker-punch. It’s all those things we want to avoid in life, even those things that we really need to face, or those things that are inevitable. The Universe (and Life) grabs us by the hand and drags us down our path, kicking and screaming all the way. It can’t be avoided.  This makes it all sound scary, doesn’t it. Well, sometimes life is scary, just because it’s unpredictable, and some of the issues we face, or decisions we have to make, are daunting. But hopefully it won’t always be scary for us. We’ll have enough courage, common sense, and optimism to get through it all and come out on top…and that’s kind of where this little tool called “Tarot” comes into play.

The suits are all the Small Details of life that keep everything running, not always smoothly, but they keep the flow going and that’s usually so much better than being at a dead standstill, because when the wheels stop turning, life tends to get stagnant. The minor arcana are like the Daily Picture of life, and the Court Cards are all the people filling up this daily picture. It can get pretty busy in there, and there’s usually lots of twists and turns, unexpected plots, and big decisions to make…and that’s kind of where this little tool called “Tarot” comes into play. 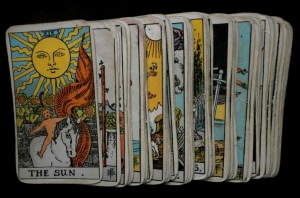