When the major arcana card “Justice” comes up in my readings, 95% of the time it’s because the person I’m reading for is involved in some way with the judicial system.  They’re either going through a divorce, or involved in some sort of litigation or other legal issues.  Always.  This never fails.  But getting someone to admit it, or getting them to see the connection, isn’t so easy.

When I was doing readings at Ameristar, two very common looking middle-aged mid-western women sat down across from me, all giggly and twittery from the nervousness of having their cards read for the first time.  As I guessed, from their very mundane appearance and demeanor (and energy), there wasn’t anything earth-shattering going on in their lives.  It was really kind of boring, actually, though I wouldn’t say this.  But “Justice” popped up, and it popped up in a significant way that sort of tapped me on the cheek– there’s a connection here, it said, shhhhh….listen.

I looked into the round face, the eager eyes, the lady bent expectantly over the cards, and I asked, “Do you have anything going on with the judicial system right now?”

Her eyes glanced up into mine (we were very close), and she said, “Ahhh….no, nothing that I can think of.”

“Yes,” I insisted.  “You have some connection with the judicial system.”

She turns to her friend sitting in the chair beside her, “Agnes, I can’t think of anything, can you?”

Agnes squints as she thinks, wracking her brain, “Noooo…”, she starts to say, drawing the word out as she was still thinking, then suddenly…“Well, your sister is a Clerk of Courts.”

I had all I could do to keep from laughing. 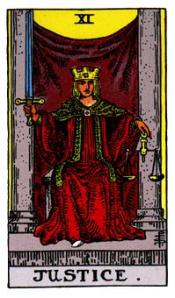